Thank you for your patience and support during this unexpected break in our Afternoon Tea programming schedule. It’s now time to pop the kettle on, sit back, relax and spend your weekday afternoons in the company of our three favorite Yorkshiremen, the would-be social climber Hyacinth Bucket, and the folks of Ballykissangel.

Mondays through Fridays starting June 29th, we’ll have a double dose of Last of the Summer Wine, starting at 1:30pm, which will be followed at 2:30pm by Keeping Up Appearances and at 3pm by Ballykissangel.

It’s not just Afternoon Tea that’s been put on hold. Filming on Britain’s longest running soap opera, Coronation Street, came to an end in March and has only just resumed. Other British series have yet to start up. Not knowing when they’d be able to start filming again, the six-night-a-week soap opera was limited to three episodes a week.

Even though filming of some TV shows has resumed in the UK, it’s going to look a lot different. For starters, actors in high-risk groups are not allowed to return to work, so in some cases their characters have been written out completely. Film crews are minimal and local crews are being hired to avoid people having to travel.

All of the scenes being filmed are done so with actors performing at a distance, and other safety measures include having actors pick up their own costumes and do their own make-up. They also have to put their own microphones on, and you’ll be seeing a lot more outdoor scenes, to avoid actors and crew having to work in confined spaces. These are just some of the guidelines published in the 44-page document put out by the British Film Commission.

Writers have been instructed to take out inessential interactions with props, and eating and drinking. There’s also no kissing, hugging or holding hands – which has to be a challenge when writing for a serial drama.

I’m sure it’s going to be a while before we get to see the results of all the various safety measures that have been put into place. It’s certainly going to look a lot different, but one thing you can be sure of and that’s the quality of the acting. It’s one of the reasons why we enjoy our British series so much. Series such as the ones you can once again enjoy on Afternoon Tea. 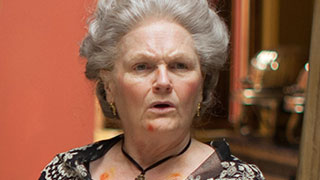