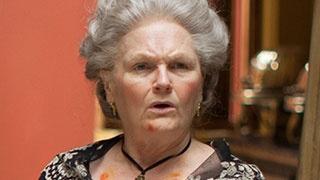 I hope you’re enjoying Beecham House on Masterpiece, a newish addition to our Sunday night line up. It’s certainly nice to see actress Lesley Nicol, who plays Henrietta Beecham, finally getting to experience life upstairs. It’s certainly a huge change from all those years she spent in the kitchen in Downton Abbey.

The richly dressed Lady Beecham is a far cry from the apron-clad Mrs. Patmore. Nicol, who says that she has “made a career out of playing northern, working-class women,” was both thrilled and surprised she got the role, as she’d never played someone like Lady Beecham before. Now Nicol hopes that seeing her as Lady Beecham will encourage people to think, “Oh, maybe she can lend a hand to that, instead of thinking, ‘Oh, she doesn’t do that.’”

Nicol described being cast in Beecham House as “a bit of a blessing. A real gift from heaven,” especially as she’s “in an age group now where traditionally everyone says there’s no work for older women. But you just go, ‘Oh, shut up – just throw me something different and we’ll see where we go from that.’”

While filming Beecham House, Nicol was simultaneously working on the film version of Downton Abbey, which meant a lot of travelling back and forth from England to India for two or three months. It sounds though it was well worth it, as Nicol described being reunited with the Downton cast after three years as “absolutely gorgeous.” She’s now hoping that the success of the film will lead to them making another one. If that happens you can be sure we’ll let you know. In the meantime, you can see Nicol, Sunday evenings at 10pm in Beecham House on Masterpiece. 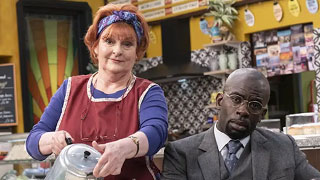