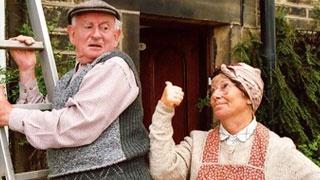 According to Kaplan’s agent, Barry Langford, Ms. Kaplan has been receiving Hospice care, although the cause has not yet been released. Langford made the announcement via Twitter on July 31st and on August 16th posted the following update:

"Though Juliette Kaplan is still in the hospice, she has asked me to send another HUGE thank you to everyone who has sent her supportive messages. She's been genuinely touched and hugely cheered by the amazing kindness of the Twitter community."

Kaplan, who played Pearl from 1985 to 2010, when Last of the Summer Wine concluded its 37-year-long run, is reportedly nothing at all like the crotchety wife of the philandering Howard Turning herself into the frumpy, grumpy Pearl must have taken considerable effort. The down to earth, no-nonsense Kaplan once quipped, “When I first started it took and hour and a half to turn into Pearl and 20 minutes to get ready to go out, now its 20 minutes to get into character and an hour and half to go out!”
A few years ago, Kaplan, started touring in a one-woman show based on Perl’s life with Howard. It was written by Roy Clarke, who Kaplan had called out of the blue with the request that he pen her a one-woman show. The fact the pair had never had a conversation before didn’t deter her. The show, called Just Pearl, toured all over the U.K.

We’ll let you know as soon as we hear anything more concerning the status of Kaplan’s health. In the meantime, you can see Last of the Summer Wine weekday afternoons on Afternoon Tea at 1:30pm.