The Friday, January 7 edition of State Circle will include a segment looking back at the program’s history and highlighting stories it has covered over four decades. The show airs at 7 p.m. both on MPT-HD and the network’s livestream.

State Circle was originally anchored by local newscaster Ron Canada and aired on Friday evenings during the annual legislative session. The program concept was to give viewers across the state a review of the action taking place on bills that might become law during the Maryland General Assembly session and to talk with the people who were impacting the prospective legislation. Following Canada, anchor duties were handled by Joe Krebs and then by Dave Durian.

In 1993, State Circle reporter Jeff Salkin assumed the anchor chair. Salkin continues in that role as the program enters a new season ahead of the start of the 2022 Maryland General Assembly.

“The service MPT provides, in producing in-depth and impartial reporting on issues of importance to all Marylanders, has never been more valuable,” explains Salkin. “Our whole team is thankful for the consistent backing of MPT’s leadership along with our dedicated viewers and supporters.”

In addition to its regular Friday evening broadcasts, members of the State Circle team recap and dissect annual gubernatorial State of the State addresses, participate as hosts and panelists in candidate debates, and host special editions on important topics.

Among the most notable of its specials was perhaps the out-of-this-world interview with Baltimore-born NASA astronaut G. Reid Wiseman when he was aboard the International Space Station in 2014. 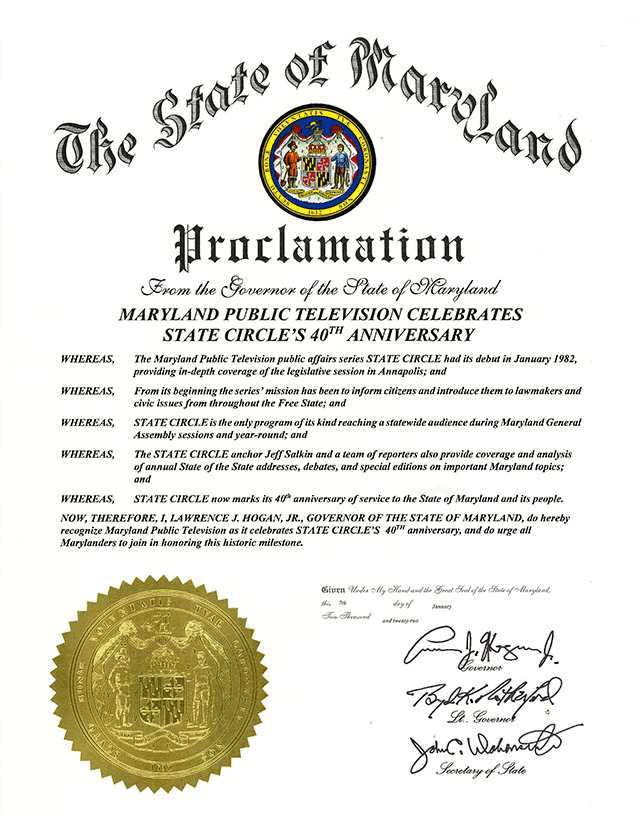 A look back on four decades of "State Circle" coverage of Maryland government and politics.