Revolution of the Heart: The Dorothy Day Story 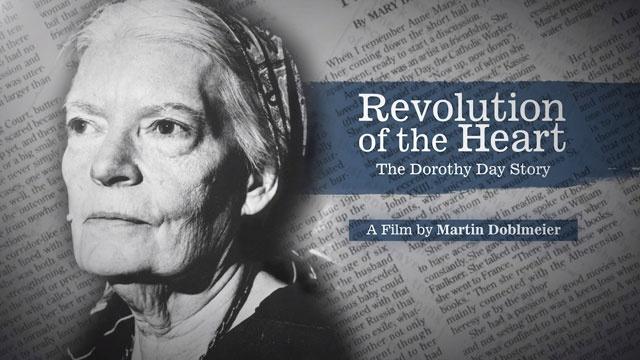 “Dorothy Day remains the conscience of American Catholicism… with a dual passion for social justice and intimacy with God.” --The Atlantic

Even before her death in 1980 at the age of 83, Dorothy Day was already being considered a future saint in the Catholic Church. This former communist and anarchist, social activist and Church critic may soon join the company of those she so admired - St. Francis of Assisi and St. Teresa of Avila. Day often bristled at those who called her a living saint - believing it was a way to easily dismiss her as a simple idealist. But in Dorothy Day, the poor, the hungry, the homeless and all those clinging to the margins of life could not have a more devoted companion.

The story of Dorothy Day reflects all her complexities, richness and contradictions. As a child she survived the great San Francisco earthquake. As a young adult in Chicago she fell in love, had an abortion, married, divorced and twice attempted suicide. She moved to New York City, rejected religion and had a child out of wedlock. In Greenwich Village she shared stories and drank whiskey with her writer friend, Eugene O’Neill. And through it all she continued to develop her skills as a writer and journalist.

But in 1932 Day befriended Peter Maurin who introduced her to Catholic social teaching and her life took a dramatic turn. Soon after, the two began the Catholic Worker movement. It launched first as a newspaper with an initial run of 2,500. Within a few years - despite the Great Depression - circulation grew to 100,000. Later, Catholic Worker houses of hospitality opened, offering food and shelter for anyone in need. Today there are more than 220 Catholic Worker houses in the United States and abroad.

In her autobiography Day describes serving the poor on a daily basis as anything but romantic. She shares how difficult it is to love people who accept charity but offer no expression of gratitude. How some can be disruptive and foul tempered. Day was a small, prayerful woman who attended Mass every morning but meekness was never in her nature. She had the strength, courage and fortitude to survive in the challenging, often chaotic environment she created.

Over the years the Catholic Worker remained committed to the principals of non-violence resistance. During World War II they were widely condemned and during the Cold War there were questions about communist affiliations. Throughout it all Dorothy Day held firm. Her social justice work influenced many, including Cesar Chavez and Daniel Berrigan. Former president Barack Obama called Day one of the “great reformers in American history.” Speaking at the United Nations in 2015 Pope Francis singled out Dorothy Day as a “great American.” And the irony - Dorothy Day has been accepted by the Catholic Church as a “Servant of God,” the first step toward official sainthood.