Station Relations
TO DINE FOR with Kate Sullivan - Season 2 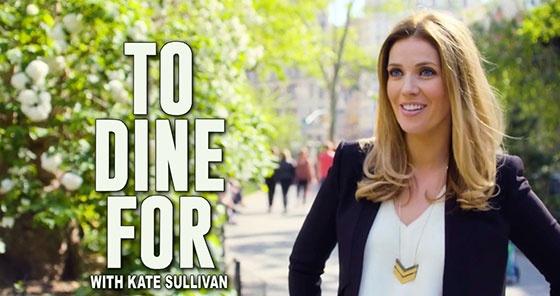 To Dine For with Kate Sullivan uses this very question as a foundation for a conversation with the world’s most brilliant and innovative minds. In the second season of this 10-episode series, four-time Emmy Award-winning journalist Kate Sullivan invites viewers to pull up a seat at the table as she talks and dines with the inspirational entrepreneurs, change agents, musicians, actors, newsmakers and truly fascinating people who are changing the world. The guests featured on To Dine For are go-getters, creators and dreamers that have turned nothing into something. Season 2 guests will feature:

Sara Blakely – Inventor. CEO. Founder of Spanx
Location: Umi in Atlanta, Georgia
With 5,000 dollars and a simple idea, Sara Blakely invented a product that would change the fashion industry forever. As the Inventor and CEO of Spanx, Sara became the youngest self-made Billionaire in the world. With no fashion experience and no business degree, her story of grit, persistence, and problem solving is one of the most interesting business stories of our time. Over artfully prepared sushi and sashimi at Umi, Sara tells us how she did it and how she is paving the way for a new generation of female inventors and entrepreneurs.

Kevin Kwan – Author
Location: Crustacean. Beverly Hills, California
Born into an incredibly wealthy Singaporean family, Kevin Kwan came to the United States to attend college in Houston. His life took many different creative roads before he was inspired to pen the book, "“"Crazy Rich Asians"”" based on his family’s life back in Singapore. The New York Times best-selling novel became a cultural phenomenon and the first movie starring an all-Asian cast in 25 years. Kevin was named by TIME Magazine as one of the most influential people in the world. Over garlic noodles at famed Beverly Hills restaurant Crustacean, Kevin talks about the roots of creativity, the long road to success and what kind of impact Kevin hopes to make in the future.

M. Night Shyamalan – Director
Location: Vetri Cucina Philadelphia, Pennsylvania
As Writer and Director of blockbuster hit movies such as "The Sixth Sense and "Unbreakable," Night has been able to hone the craft of ‘scaring the living daylights” of moviegoers with his suspenseful and often terrifying flicks. He has undoubtedly reached careers highs and dramatic career lows. At his favorite restaurant in Philadelphia, Night dishes on how to stay on the creative cutting edge and what he hopes is his legacy is in life and film.

Katori Hall – Playwright
Location: Grand Central Oyster Bar. New York City
Columbia, Harvard and Juilliard educated, Katori Hall planned to be an actress until a fateful assignment at Harvard changed her direction. Instead, she became a playwright. Her play, The Mountaintop, about the final night before Martin Luther King’s assassination, won critical acclaim making her the first black woman to win the Olivier Award for Best New Play. Over Oysters at the famed Grand Central Oyster Bar, Katori shares what shapes her thinking, how she views her role in the world and what success really means to her.

Jake Wood – Founder of Team Rubicon
Location: Wando’s Madison, Wisconsin
Jake Wood is a former Marine who used his military training to create and lead a non-profit called Team Rubicon. He won the 2018 Pat Tillman awarded for service at the ESPY awards and has written a book Take Command: Lessons in Leadership: How to be a First Responder in Business.. At his absolute favorite spot for burgers and beer, Jake talks about his passion to put Veterans back to work and harness their military training to serve and help those most in need.

Erik Weihenmayer – Athlete
Location: The Sherpa House Golden, CO
Erik Weihenmayer became the first blind man to ever summit Mount Everest. His achievement put him on the cover of TIME magazine and brought him International acclaim. Turns out that achievement would be just the launching pad for a life of service and commitment to helping thousands of people overcome whatever holds them back in life. As the director of non-profit No Barriers, Erik works directly with people who either are disabled mentally or physically. Over the fascinating flavors of the Himalayan Mountains, Erik shares his journey from outdoor-enthusiast to one of the world’s most sought-after speakers and what it really means to live a life with "No Barriers."

Blake Mycoskie – Founder of TOMS Social Entreprenuer. Philanthropist Activist.
Location: Jackson Hole, Wyoming - Snake River Grille
From the majestic Teton Mountains, we hear the story of the man who defined what it means to be a "social entrepreneur". Blake Mycoskie founded TOMS shoes because of a need he saw in impoverished neighborhoods around the world: shoes. His "one for one" business model of donating a pair of shoes for every pair sold has been copied and recreated in thousands of iterations and has been studied by many. Amidst a crackling fire and over delicious "minute steaks" at the Snake River Grille, Blake shares the soul of an entrepreneur and the project that has re-ignited his spirit.

Deepak Chopra – Author. Spiritual Teacher
Location: ABC Kitchen. NYC
New York Times best-selling author Deepak Chopra is a medical doctor by trade but he is best known for his work to get people to live a life of greater consciousness. His devotion to mental wellness and well-being is at the center of his work, his teachings and his speaking engagements. Over sustainable, organic and farm-to-table cuisine, Deepak shares how he brings an idea to execution through the power of the mind. This enlightening conversation is both nourishing for the mind and spirit.

Gitanjali Rao – Inventor
Location: Hacienda Colorado Denver, CO
At the age of just 11 years old, Gitanjali dreamed up a solution to a problem many had overlooked. Inspired by watching the news coverage of the Flint, Michigan water crisis, Gitanjali invented a water treatment device that Flint residents could use in their homes to see if their water is safe. This invention has won her numerous national and international awards and accolades. Over Mexican comfort food, Gitanjali shares the basics of innovation and creativity and inspires us all to look more closely at big world problems in a more resourceful way.

Ashley Longshore – Artist
Location: New Orleans, LA
Ashley is a painter and gallery owner from New Orleans, Louisiana. She has been called a modern-day Andy Warhol with her outlandish and pop-culture art. Her success as an artist has not come easy and her story is nothing short of inspirational. Over the decadent flavors of New Orleans, Ashley shares the details of her creative process, and what it’s truly like to become an acclaimed artist and how success has changed her view of art and the artistic process and her new effort to support local artists everywhere.

Kate Sullivan, a four-time Emmy Award-winning journalist, traveler, and life-long foodie, hosts the series. For the last 10 years she has been the primary evening news anchor for CBS Chicago and the morning news anchor for CBS New York. Her passion for storytelling is undeniable. While Kate will drive the show as host, the true stars are the guests, the food, and the locations. The viewer is invited along for a fantastic meal in a new location to engage in conversation with inspiring people. The show is intended to be entertaining and aspirational to new points of travel, restaurants to experience, and ideas to digest.

TO DINE FOR with Kate Sullivan - Season 1

TO DINE FOR WITH KATE SULLIVAN

The new 10-episode series, TO DINE FOR WITH KATE SULLIVAN, is an invitation to dine with some of the world’s most brilliant and innovative minds. the series is hosted and executive produced by Emmy Award-winning journalist Kate Sullivan.

During each 30-minute episode Kate travels the country and overseas to interview her special guests at their favorite restaurants. From the origins of Spanish tapas in Barcelona, Spain with Chef José Andrés, to the classic Chicago comfort staple of deep dish pizza with designer Jason Mayden, viewers learn where they love to eat and why they love to eat it.

TO DINE FOR WITH KATE SULLIVAN is also a celebration of the American dream. While the series features the atmosphere, the location, the ambiance, and a favorite meal of each particular guest, the food is just the first course. During the meal, Kate’s guest talks about how they made it, how they struggled, how they define success and how they tried to achieve it. Since all of the guests have created “something out of nothing,” the ideas and lessons learned will be the main entrée and will leave the viewer hungry for more.

Each episode of the series features guests who are the "go getters," the "creators" and "dreamers" – having turned ideas into success stories. They are entrepreneurs, change agents, musicians, actors, and truly fascinating people who are changing the world.

Kate Sullivan, a four-time Emmy Award-winning journalist, traveler, and life-long foodie, hosts and produces the series. Kate has spent 18 years in small, medium, and large television markets across the United States. For the last 10 years, she has been the primary evening news anchor for CBS Chicago and the morning news anchor for CBS New York. Her passion for storytelling is undeniable.

TO DINE FOR WITH KATE SULLIVAN is intended to be entertaining and aspirational to new points of travel, restaurants to experience, and ideas to digest.

Funding for this series is provided by American National Insurance and Kendra Scott. This series is produced by Shotput Media Group, presented by Maryland Public Television and distributed by American Public Television. Viewers interested in watching the new series are encouraged to contact your public television station to find out when it will be available in your area.